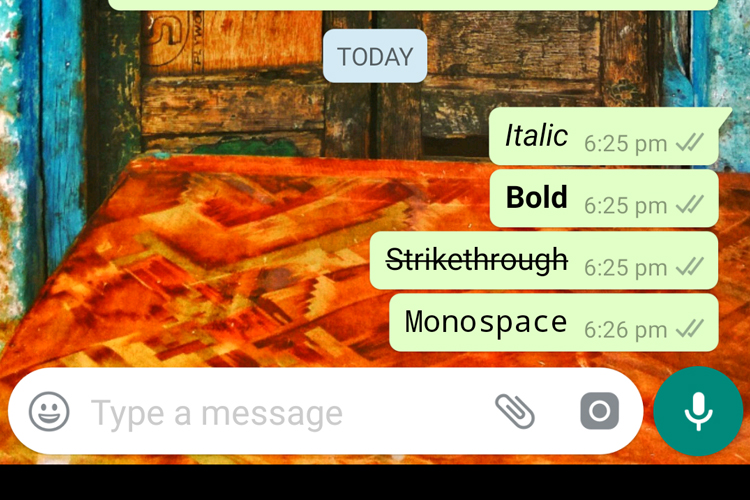 Unless you’re a WhatsApp pro user, you may be surprised to know that there are text formatting options that you can apply to your messages. Markdown characters can help you emphasize certain words or phrases by making them italicized or bold, and it’ll even let you cross out words and change the font. It’s one of those nice touches that aren’t available in most other messaging apps.

The feature is available for both iOS and Android devices, and there are minuscule differences between the two. In older WhatsApp versions, Android phones had more options that an iPhone would, but now it’s pretty much the same across the board. So make sure you’ve updated to the latest version of WhatsApp for Android or iOS to get the most out of formatting text in your chats.

For both Android and iOS devices, WhatsApp lets you format your messages with italics, bold, and strikethrough text just by typing special characters before and after the text in your message. The use of these special characters is referred to as markdown. You can even turn the regular font into a monospaced font with the right syntax. Here’s how you do it:

WhatsApp for both mobile operating systems displays a live preview of text attributes as you type, so you can see precisely how messages will show up in their formatted state when sent. And you can combine italics, bold, and strikethroughs if you want, but if you apply monospace to any other formatted text, it will cancel it out since monospace removes all formatting when the font changes.

WhatsApp allows you to format selected text inside your messages.

To italicize your message, place an underscore on both sides of the text, like so:

To bold your message, place an asterisk on both sides of the text, like so:

To strikethrough your message, place a tilde on both sides of the text, like so:

To monospace your message, place three backticks on both sides of the text, like so:

Note: There is no option to disable this feature.